Food cooking and eating – stories and ideas from a passionate foodie

Yes Jane’s big birthday was a real food and people pleasure ride.  Let me take you through the rest of it.

It all started in our hometown, with after work drinks and nibbles with work colleagues.  The nuts and olives just make you drink more.  The rather splendid Tapas at Claytons lounge in Marlow did keep us enticed.  I don’t know about you, but this is one of my favourite ways of eating.  Lots of different taste sensations, some naughtier than others (some feeling almost healthy…), but it just makes sure you don’t get bored.  It feels like the antithesis of pizza.  I do like a bit of pizza, but like small ones that you can share bits of each others.  Otherwise that last slice of a giant one just feels too much like hard work to me! 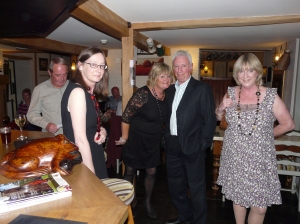 Hail, hail the gang’s all here!

We had lunch on the way to Devon.  The Cross House Inn at Doynton (Gloucestershire borders with Avon and Somerset – near Bath) had a really splendid lunch delight.  We knew we were in for loads of food over the next week or so, and the menu looked a little on the heavy side.  Then we noticed “ Hot Belly Pork Roll with Apple Sauce and a handful of chips”.  This was £2.50.  What a tasty bargain!

Next day we met up with Jane’s sister, brother-in-law, and their brother and sister in-laws. They are party animals.  We were all booked into The Lazy Toad in Brampford Speke, near Exeter.  I have blogged about the wonder of their food before, and even gone as far as recommending on Trip Advisor.  We had always been there just for lunch, but this time we were going the whole hog (which they have on the menu occasionally…) by having the full evening menu and collapsing to bed after.

After pressies (great excitement) we moved on.  The menu is sort of fine British cooking with a modern twist.  You can see that from the starters: 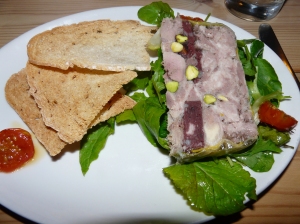 And the mains: (below) 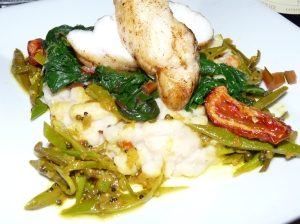 Creedy Craver Organic Roast Chicken – like chicken used to be

And what fine puds!  You’ll have to go to sample them…

We had assumed we would not need breakfast.  But you know how it is – you manage somehow.  No lunch after our walk – because we really didn’t need that.  Mike and Judy, our old neighbours from Cheltenham days, joined us in the evening in Bovey.  I cooked a light dinner of steamed salmon (just stick a lid on the frying pan after adding lemon juice), with crushed potatoes and green beans.

Gidleigh park – last blog – was reserved for the day itself.  Go back if you missed that one!

After one night of food abstinence, we set off for St Enodoc hotel in Rock, North Cornwall.  This place was very modern, lovely views – and has a Michelin starred restaurant.  (Can you feel a theme coming on?)  The restaurant has a full fish tasting menu with the potential to have a flight of wine with it – different wine to enhance each course.  We wanted simpler – and Nathan Outlaw is most famous for sea food.  I had the same starter, which we shared a bit, both nights.  Queenie Scallops.  Six gorgeously tasty little melting moments of succulent delight.  It seemed wrong to eat them.  Bread was absolutely essential to mop up the quite marvellous sauce.  We did fish (bream and plaice) on the bone on night one, then fillet (grilled Brill and Haddock) on the second evening.  Look, the stuff is really kept immensely simple.  Finest possible ingredients not played about with too much at all.  Sometimes simple just is best.  The veggies were simple and fine (would have preferred the leaks to be 2 minutes longer, but minor detail based on wanting less crunch than many prefer).

Light breakfast the next morning, because we were meeting our friends Gus and Wendy from Gweek area of Cornwall at The Lost Gardens of Heligan.  Thank goodness they did a simple light lunch, or we might have gone off “pop”!

We had managed to spread it out a bit – both the friends and the food – but it still meant we were overwhelmed both with smiling happily and with high level food.  The beans on toast was such a down to earth delight for supper that evening.  And I never know if a nice Rioja is the best wine with this, but it certainly finished us off!

The Birthday Progress – The Day itself

A B&B in a different class – The Ashton, Lancaster

This site uses Akismet to reduce spam. Learn how your comment data is processed.